In our Ravencoin mining guide we shared all the best mining software’s that are available for X16R. Mainly we suggested Enemy 1.08 (closed source), Nevermore and Suprminer 1.6 (open source). We thought there couldn’t be a better optimized and stable miner than these. But this Enemy miner is only getting better and better. With the recent release of  z enemy 1.09a, looks like it is the fastest miner for X16R currently. Not just X16R but it also added support to 2 new algorithms such as VIT and XEVAN along with X16S, X17, PHI and Bitcore.

A week ago Zealot / Enemy announced their new version of Enemy miner version 1.09 in their Discord. It was in beta stage and even few of the community members tested it and said it runs more stable than Enemy 1.08. After doing several tests and optimization Z-enemy 1.09a is finally out and became officially available Today. 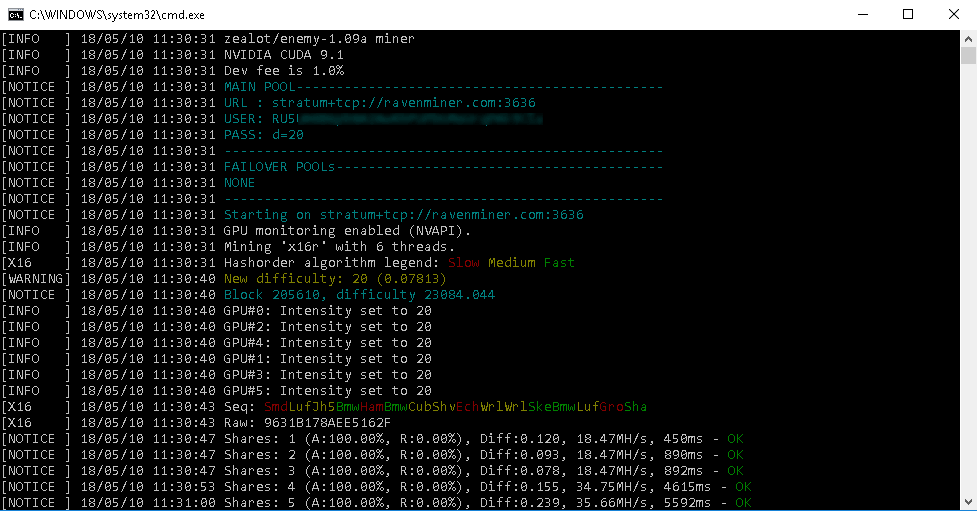 This new Enemy 1.09a is not only faster and stable than 1.08 but is much more better than that. It has added new features like fail-over pool support, search mode, better error reporting and pool latency. Plus new algorithm support such as XEVAN and Vitality. This is a closed source CUDA miner and is available for both Windows and Linux. Also you can use this on Hive OS and SMOS. Plus the developers have a plan of adding more algorithms in the upcoming release.

Download links for enemy 1.09a is at the bottom of this article.

1. Enemy 1.09 has added Kernels speed improvements on all GTX 9 series and 10 series cards. According to the developer this is the improvement you can expect on version 1.09 compared to 1.08.

3. Search mode is available which when you set low static difficulty you might see some extra shares being submitted.

4. Revised developer fee mechanism: In previous version the miner use to break off connection when working on developer fee which has been fixed in 1.09. Yes, This miner has 1% dev fee.

5. Added pool failover support: Now this is the feature that is most needed. Occasionally in your miner you might see stratum connection disconnected error. This is mainly a pool side error and during that time your miner stops working. Now in your batch file you can add multiple pools along with the main pool. In case if main pool loses connection then it switches to other pool and continues its work.

Below are the sample config file for the following algorithms. All the command line options can be found in the read me file of the miner.

This miner just got released so we couldn’t test all algorithms and coins. However we gathered some performance reports that are shared by the users.

For Ravencoin X16R a community member has already done several tests when it was in beta stage. For the test they’ve used 12 x NVIDIA GTX 1080 Ti on Windows 10 which is split into three mining instances. To get accurate results all three mining instance ran at same time and at same pool. The complete report and test results has been shared in Bitcoin Talk.

There is a forum thread at Bitcoin Talk for Zealot/Enemy where you can find all information on this miner. Also troubleshooting, performance and fine tuning tips has been shared by the developers so do check them out if you are using this miner. This is the fastest NVIDIA miner for X16R, X16S, PHI and XEVAN currently. It has 1% developer fee which we think they deserve for the amount of work that they put on the software. The only reason we are hesitant in recommending this to the fellow miners is because this is a closed source software. But hey, majority of the community seem to be using it. We say use it at your own risk.