Home / Knowledge Base / How many Bitcoins are mined per hour / day / month & how many left to mine?

Recently we explained the supply of Ethereum. Likewise here in this post let’s discuss Bitcoins supply where we’ll answer the following questions.

One of the core features of the Bitcoin is its limited supply. In a centralized economy the monetary base is fully controlled by a central bank. One of their most important role is issuing currency. These government issued fiat money gives central banks greater control over the economy as they control how much money to be printed.

All that money printing, inflation and devaluation of currency made people to realize the importance of limited supply. The very reason why precious metals like gold is valuable is because they are limited in supply. Only a small amounts of gold is being mined every year. This is why gold is widely considered as a hedge against inflation. However nobody knows the exact amount of gold that is available Today. There are only rough estimates.

Now Bitcoin takes scarcity to the next level. No matter the price of Bitcoin there will only be a predetermined amount of Bitcoin; that is only 21 million Bitcoin will ever exist. Bitcoin is a fully decentralized monetary system where nobody controls the supply and no central authority can regulate the monetary base.

The coins are created only by miners on a peer-to-peer network and the algorithm defines how the coins are issued and at what rate.

Let’s first understand what is mining and how Bitcoins are issued on the Bitcoin network.

How Bitcoins are issued / created?

Like Gold; Bitcoins are created through the process called mining. In gold mining huge mining rigs and man power is used to mine gold from the earth. Whereas in Bitcoin special purpose computers are used to solve a mathematical problem. By solving the puzzle miners add a new block of transaction to the blockchain. For successfully mining a block new Bitcoins are awarded to the miners by the Bitcoin network.

New Bitcoins are created everytime a miner discovers a new block. It is known as block reward or mining reward. To learn more check this post which explains Bitcoin mining block rewards in more detail.

Block rewards are the only way in which new Bitcoins are created and enters into circulation. Now if you understand how many blocks are mined in a day and how many coins are rewarded from each block you’ll know how many Bitcoins are being mined.

If you want to estimate how many Bitcoins you can mine using your hardware then this post is not for you. There are several mining calculators that tells how much you’ll mine in a day based on your computing power.

How many Bitcoins will ever exist?

The total supply of Bitcoin Is limited and it is pre-defined in the Bitcoin protocol. In total only 21 million Bitcoins will ever exist. Yes, you heard it right! Only 21,000,000 Bitcoins will ever be created. The protocol is designed in such a way that it cannot exceed the maximum supply of 21 Million BTC.

Forget everyone. With such a short supply not even every millionaires around the world can own 1 Bitcoin. Stacking sats is the only option. Sats are nothing but Satoshi. Each Bitcoin can be sub divided into 100 million Satoshi. 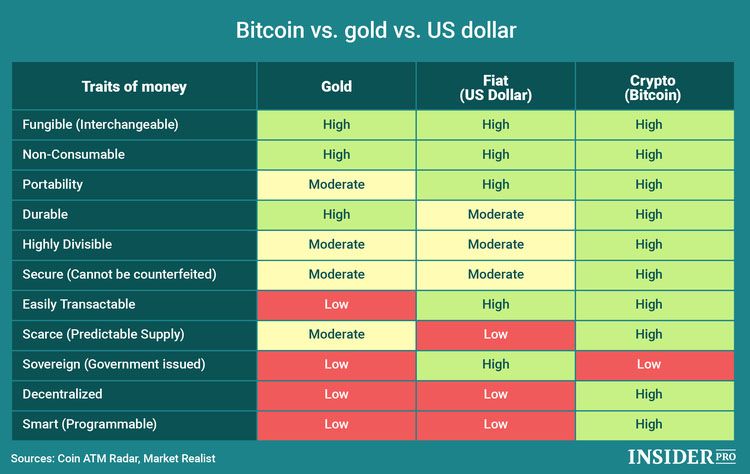 When you compare Bitcoin to Gold; Bitcoin is not only scarce. It is highly divisible, portable and has high security. Now not all the 21 Million Bitcoins are available for purchase. Only 90% of the total supply are available in circulation.

How many Bitcoins (BTC) are there in circulation?

Currently there are quite over 18.6 Million Bitcoins in circulation. As of writing this article the exact number is 18,620,000 BTC which will change every 10 minutes.

To get real time data on the Bitcoin’s circulating supply there are several ways. If you are running Bitcoin core wallet then execute gettxoutsetinfo command in the console window. It will return the exact current circulating supply.

Other than this there are many data / stats websites that provides real time data on the Bitcoin supply. For example to track the current supply you can use this https://www.blockchain.com/charts/total-bitcoins which displays Bitcoins circulating supply in a graph. 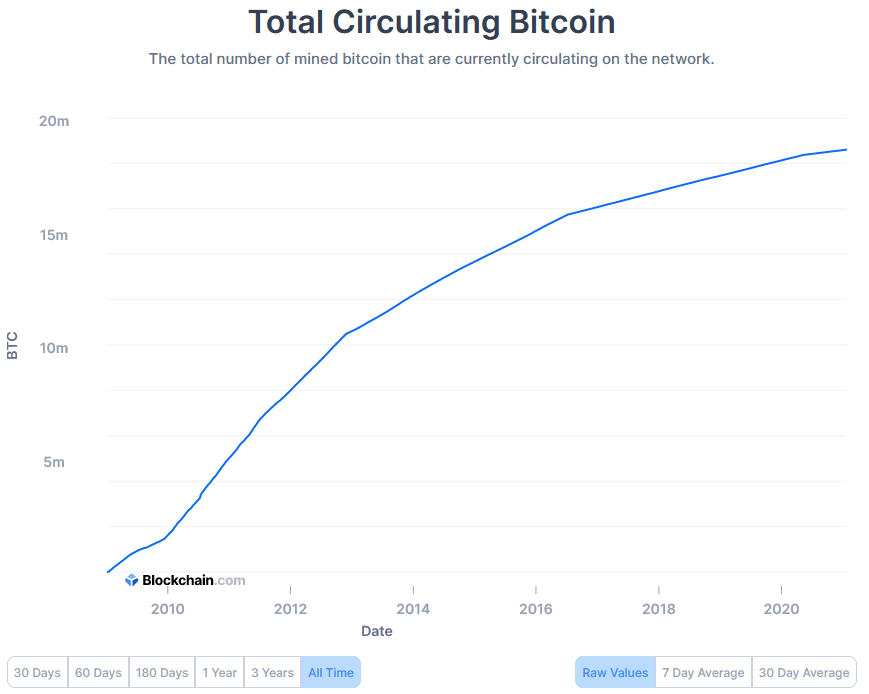 Also there are many Bitcoin block explorers which will provide you the same numbers.

How many Bitcoins are left to mine?

With only 21 Million Total supply and with 18.6 Million already mined there are only less than 2.4 million Bitcoins left to mine.

Now the question is when the remaining 2.4 Million Bitcoins will be mined or when will it reach the total supply of 21 million Bitcoins?

You see Bitcoin is just over a decade old. On 3 Jan 2009 Bitcoin came into existence where the first block (genesis block) was mined by the founder Satoshi Nakamoto.

It is expected that approximately by the year 2140 is when all the Bitcoins will be mined. Let see how it works.

Bitcoin was designed as a deflationary currency. To achieve this the Bitcoin blockchain has a predefined set of consensus rules such as:

Ever since its inception the Bitcoin network controls the issuance of coins all by itself and the above consensus rules remain unchanged till date.

So the supply limit is hard-coded and by design the Bitcoin blockchain only releases a fixed number of Bitcoins. With time the number of Bitcoins introduced to the Bitcoins supply will get diminished. This will lower inflation rate and increase the scarcity which in turn has historically driven the price up. 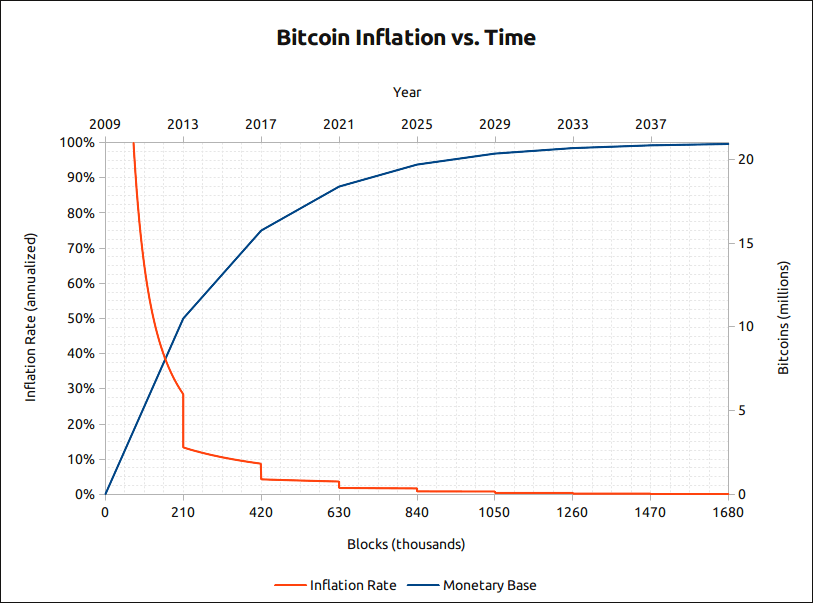 Take a look at the Bitcoin Yearly chart to understand this.

For instance just think what happens if the Bitcoin supply is not capped at 21 Million and the block reward is not halved every 4 years. With infinite supply the chances of Bitcoin being called as an investment or a store of value would have not been possible. People would have mined as much they want.

Similarly if there were no mining block reward halving event it would have only taken 8 years to mine the entire supply. If it was all mined by the early adopters then there will be no coins left for new enthusiasts which will eventually kill the Bitcoin adoption. It would have never went mainstream. Now after 12 years and with still 10% of coins left to mine Bitcoin is on the verge of mass adoption.

You now know the total supply of Bitcoin that will ever exist which is 21 Million BTC. Also you know how to look for the current circulating supply.

Now to know how many Bitcoins are being mined every hour / day / week / month and year you need to know the following: Bitcoin block time / block reward and halving event.

In Bitcoin the target block time is 10 Minutes. That is the network aims to produce one block every 10 minutes. In order to find a block miners need to solve a problem and that needs a lot of computing power. So what happens if there are lots of miners or very less hashing power on the network?

To ensure smooth functioning of the blockchain there is something called difficulty adjustment which adjusts the mining difficulty every 2016 blocks (roughly every 2 weeks). If there are more miners on the network with more hashpower then the blocks will be solved in less than 10 minutes. Likewise if there are less miners solving the hash problem it will take quite more than 10 minutes to find a block.

So one block every Ten Minutes.

Bitcoin miners receive Bitcoin as a reward for finding and validating a block of transaction. This is called mining rewards or block rewards. Now not all miners on the network will receive the block reward. Only the one who discovered the block will get the reward. It can be an individual with a large mining farm, or it can be a group of miners (mining pool). 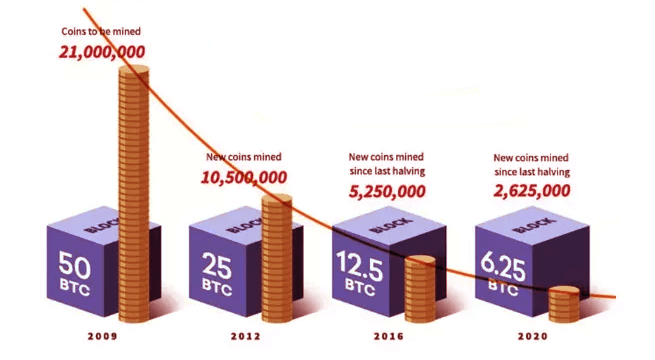 The current Bitcoin block reward is 6.25 Bitcoin which will reduce to 3.125 BTC by 2024. This design will effectively lower the Bitcoin inflation rate over time. After the 2024 halving the Bitcoins inflation rate will eventually go to less than 1% a year.

The below table shows the projected bitcoin supply long time.

To keep track of when the Bitcoin halving event will occur visit https://www.bitcoinblockhalf.com/. The site has all the information you need to know along with real time updates.

How many Bitcoins are mined per Hour / Day / Week / Month / Year?

Note: This calculation is made based on the block reward and block time. The numbers may be slightly off. Also note that it will change every 4 years due to the halving event which is programmed.

Now coming to the last question. What happens when all the 21 Million Bitcoins are mined?

What happens after all Bitcoins are mined?

Today miners verify transaction on the Bitcoin blockchain and help prevent the double spending problem. The main reason why they secure the network is because of the incentives. The mining rewards which they get from solving a block. One of the biggest concern and question is how will the miners secure the network when they are not rewarded for their work?

This we will answer in another article.

Hope this article helped you to understand the limits placed on the Bitcoin supply. You now know how Bitcoins are produced and how many Bitcoins are created each Day / Month and Year.

Bitcoin Confirmations – All you need to know about block confirmations

What is Bitcoin Reorg? Is it really possible to reorg Bitcoin blockchain?